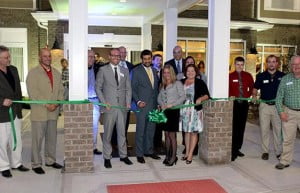 Indus Hospitality Group hosted a grand-opening celebration Oct. 21 for their new four-story, 77-room Microtel Inn & Suites by Wyndham on Elm Street in Penn Yan. Over 100 visitors enjoyed tours of the amenities, which include 18 suites, a pool, meeting space, and a fitness center. They also sampled a buffet of hors d’oeuvres, local wines and beers, and a special cake for the event.

While the pool will be completed soon, delayed by some minor flooring issues, Mehta states the use of the first floor space fronting on Elm Street has not been officially determined, calling it a surprise. Mehta says it will be leased to another entity, but declined to mention its nature.

Founded in 1988, Indus owns and operates more than 50 properties, primarily hotels and restaurants in the Rochester, Finger Lakes, and Western New York regions, and employs more than 800 people.

Indus also opened the Taco Bell restaurant in December on Lake Street in Penn Yan, and is one of the largest licensees in the Microtel system of more than 325 hotels, which was founded in Rochester.